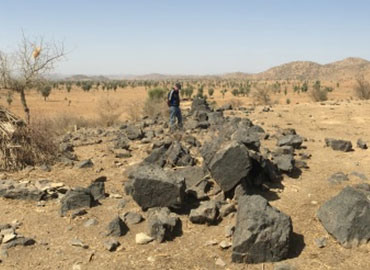 Vancouver, British Columbia, September 15, 2020. Baltic I Acquisition Corp. (“Baltic”) (TSX- V:BLTC) and Alpha Exploration Ltd. (“Alpha”) are pleased to announce that they have entered into an arrangement agreement dated September 14, 2020 (the “Arrangement Agreement”), pursuant to which the parties have agreed to complete a business combination (the “Transaction”) by way of a statutory plan of arrangement under the Business Corporations Act (British Columbia) (the “Arrangement”) that will result in Alpha acquiring all of the issued and outstanding shares of Baltic (“Baltic Shares”) in exchange for ordinary shares of Alpha (“Alpha Shares”). Concurrently with the execution of the Arrangement Agreement, each of the directors of Baltic have entered into support agreements, in which they have agreed to vote the Baltic Shares they beneficially own or control in favour of the Arrangement and related matters at the Baltic Meeting (as defined below), and to otherwise support the Transaction.

Alpha is a privately held company incorporated under the laws of the British Virgin Islands that owns mineral exploration properties in Eritrea, as more particularly described below. Baltic is a “Capital Pool Company” as defined by TSX Venture Exchange Policy 2.4 – Capital Pool Companies (“Policy 2.4”), and the Transaction is intended to constitute Baltic’s “Qualifying Transaction” in accordance with Policy 2.4. Alpha will be the issuer resulting from the Transaction (the “Resulting Issuer”), owning 100% of the issued and outstanding Baltic Shares, and the Alpha Shares are intended to be listed and posted for trading on the TSX Venture Exchange (“TSXV”) as a substitutional listing. Subject to TSXV approval, the Resulting Issuer will be named ‘Alpha Exploration Ltd.’”

“I have known Alpha’s proposed CEO, Michael Hopley for many years,” commented Harry Pokrandt, a director and the CEO of Baltic. “Michael and his geological team have local knowledge, and a history of discovery and building value for shareholders which is second to none. This is already evident by the impressive results at Anagulu and Alpha’s other prospects. I am particularly excited to join the Alpha team and look forward to the completion of this transaction.”

In accordance with TSXV policy, the Baltic Shares have been halted from trading and are expected to remain halted until closing of the Transaction.

Summary of the Transaction

Prior to the closing of the Transaction, Alpha intends to conduct a private placement (the “Alpha Financing”), in which Alpha will issue either Alpha Shares or subscription receipts convertible into Alpha Shares immediately prior to closing of the Transaction upon satisfaction of specified release conditions. In either case, the minimum aggregate gross proceeds of the Alpha Financing will be CAD$4,000,000, at a price per security as Alpha may determine.

The completion of the Transaction is subject to the satisfaction of certain conditions being met including but not limited to: (i) completion of the Alpha Financing; (ii) approval of the Arrangement by Baltic Shareholders at a special meeting of shareholders (the “Baltic Meeting”); and (iii) receipt of all requisite third party consents, waivers, permits, orders and approvals, including, without limitation, the approval of the TSXV and of the British Columbia Supreme Court. Accordingly, there can be no assurance that the Transaction will be completed on the terms proposed above or at all.

Additional information about the Transaction will be disclosed by way of news release and included in the information circular sent to Baltic Shareholders in connection with the Baltic Meeting, including particulars of the Alpha Financing, the Exchange Ratio and holdings of shares of the Resulting Issuer after giving effect to the Alpha Financing and following completion of the Transaction.

Subject to satisfaction or waiver of these conditions referred to above and contained in the Arrangement Agreement, Baltic and Alpha anticipate that the Transaction will be completed on or before November 30, 2020.

Alpha is a privately held company incorporated under the laws of the British Virgin Islands that holds, through its wholly owned Eritrean subsidiary Alpha Exploration Eritrea Limited, a 100% interest in the 1,028 Km2 Kerkasha Exploration License (“Kerkasha EL”) located in southwestern Eritrea.

Access to the Kerkasha EL is about a six-hour drive on paved and gravel roads from the capital city of Asmara. The property is underlain by rocks of the Arabian-Nubian shield (“ANS”) and has demonstrated prospectivity for gold, copper and silver mineralization with additional potential for lead and zinc. Within the Kerkasha EL there are 4 colonial era (Italian) gold mines as well as large areas of alluvial and in-situ artisanal gold workings. The property was previously held by the AngloGold Ashanti-Thani Investments Joint Venture that spent approximately CAD$4.6 million over a 3-year period, primarily on airborne geophysical surveys and remote-sensing interpretation with limited surface sampling and no drilling.

Alpha has held the Kerkasha EL since January 10, 2018 and since this time has spent approximately CAD$5.2 million on property-wide soil geochemistry, reprocessing and interpretation of airborne datasets, prospect scale geological mapping, soil and rock chip sampling, various ground geophysical surveys and machine-learning to upgrade geological maps and identify prospective areas for orogenic gold and volcanogenic massive sulphide (VMS) mineralisation. Drilling of four gold and base metal prospects has also been achieved. More details can be seen in the Alpha corporate presentation which can be found at http://www.alpha- exploration.com/.

The most promising drill results to date are from the Anagulu gold-copper-silver prospect which is a virgin discovery by Alpha geologists in the south-west of the license area. Anagulu consists of a large coincident soil and rock chip gold and copper anomaly over 2km in length and several hundreds of meters wide, defined by a shear zone striking at 45 degrees. Gold values in many of the rock chip sampling over the 2km range from 1.06g/t up to 4.48g/t with many of the copper values ranging from 1.22% up to 9.45%. See Map 1 and Map 2 below for details. 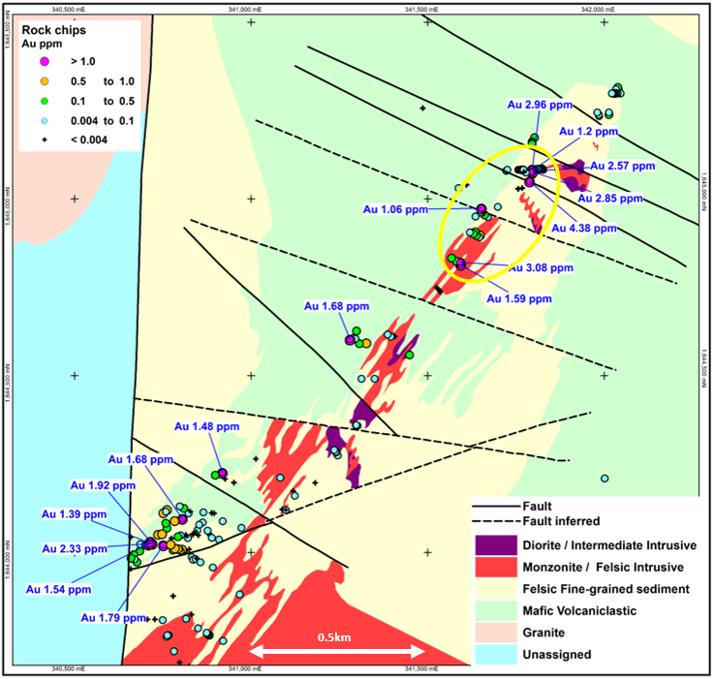 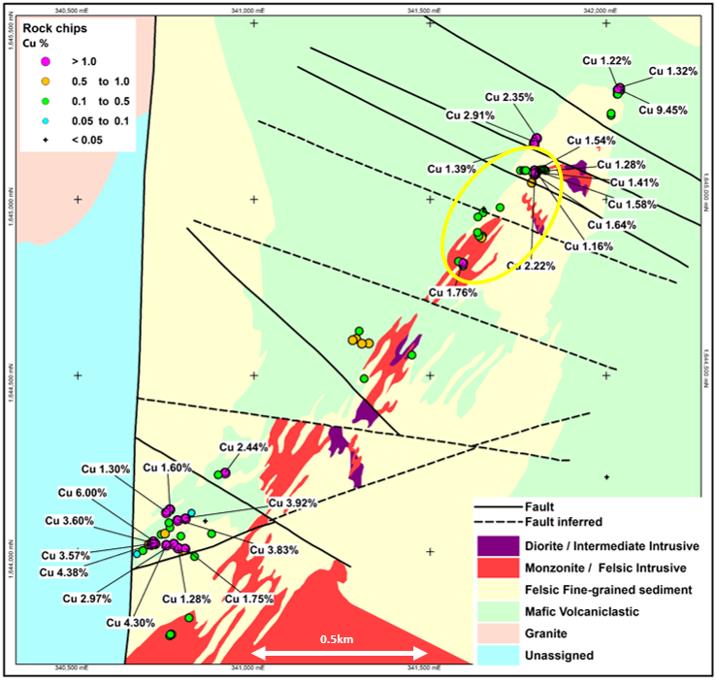 Thirty reverse-circulation drill holes and two diamond drill holes have been drilled to date at Anagulu. A number of impressive gold and copper mineralized intersections have been returned. Table 1 below summarizes the most promising results.

Note: There is insufficient evidence to estimate true thickness of the reported drill intervals.

As can be seen in Table 2 below, the assay results from the first diamond drill hole AND-001 at Anagulu show robust and consistent gold, copper and silver mineralization over 49 meters with this zone being less than 100 meters true vertical depth below surface. Petrographic studies of AND-001 shows gold and copper mineralization associated with the disseminated sulphide mineral chalcopyrite, within a strong silica matrix.

After the last phase of drilling at Anagulu, Alpha had TMC Geophysics (Canada) carry out an Induced Polarisation geophysical survey over the area measuring chargeability and resisitivity. Chargeability is focused on identifying disseminated sulphides (e.g. chalcopyrite) with resistivity used to identify highly resistive units (e.g. quartz veins and silica flooding). As can be seen in Map 3 below, several strong coincident chargeability and resistivity anomalies occur immediately beneath the best drill holes at Anagulu and extend for several kilometers in strike. Approximately 6,000 meters of both reverse-circulation and diamond drilling are planned for Anagulu to start in late September or early October 2020. An additional 4,000 meters of drilling is planned for other prospects on the Kerkasha EL such as Kosolda (gold), Asheshi (gold), Kona (gold-copper-lead-zinc) and the Tolegimja (copper-zinc-gold) prospects. 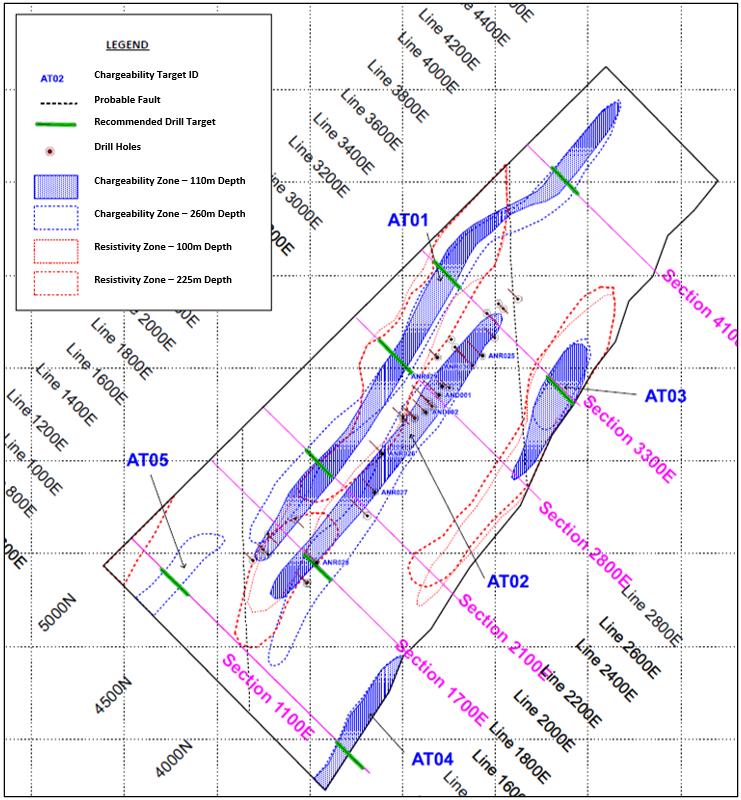 A technical report prepared in accordance with National Instrument 43-101 – Standards of Disclosure for Mineral Projects (“NI 43-101”) and the policies of the TSXV has been prepared for the Kerkasha Project and will be filed with the TSXV for its review and acceptance.

A Quality Assurance/Quality Control program was part of the drilling program on the Kerkasha Project. This program included chain of custody protocols as well as systematic submittals of standards, duplicates and blank samples into the flow of samples produced by the drilling. Samples were prepared at Nabro Laboratories Limited, Asmara, Eritrea and then shipped via DHL to ALS Life Sciences, Ireland for analysis. Mr. Hopley, a qualified person, has verified the data underlying the information disclosed herein, including sampling, analytical and test data, by reviewing the drill logs, geological interpretations and supporting analytical data and documentation. There were no limitations on the verification process.

All scientific and technical information in this press release, including the results of the Kerkasha Project drilling program, has been prepared, or approved by Michael Hopley, the proposed President and Chief Executive Officer of Alpha Exploration Ltd. and a “qualified person” for the purposes of NI 43-101.

Information about the Resulting Issuer

Mr. Hopley has more than 35 years of international experience in the mineral exploration business. He has BSc (Geology) from London University and is a Member of American Institute of Professional Geologists. He has held executive and board positions with companies such as Gold Fields Mining, Bema Gold Corp. Arizona Star, Tournigan Gold Corp. European Uranium, Sun Peak Metals and Azarga Metals Corp.

Between 2004 and 2016 Michael was President and CEO of Sunridge Gold Corp. (TSX listed) that owned the Asmara Project in Eritrea. During this time, Sunridge raised and spent over $80 million exploring and discovering many deposits including the 80 million

tonne Emba Derho copper-zinc-gold VMS deposit. Sunridge completed a bankable feasibility study on four of the deposits in 2014 and sold the project to a large Chinese company in 2016.

Mr. Smith has more than 30 years’ experience as a geologist working in Australia and Africa and has worked and lived in Eritrea for most of the past 20 years. He has been Instrumental in discoveries and developments that went on to producing mines on both continents.

Chris van der Westhuyzen is a founding member and COO of Hemera Capital Management LLP (“Hemera”) and has over 22 years of experience in financial markets. As COO, over the last 11 years he has managed various contracting businesses in the mining sector.

Prior to joining Hemera, Chris spent 11 years with Morgan Stanley and Goldman Sachs working across a broad range of product lines including equities, fixed income and structured finance operations before taking on the management of European OTC clearing services in Morgan Stanley’s Prime Brokerage division. Chris has a Bachelors of Commerce degree in Economics and Marketing from Canterbury University, New Zealand.

Mr. Pokrandt is a current Director of Kore Mining Ltd and Blockhead Technologies. Previously he was Managing Director of Macquarie Capital Markets Canada Ltd. (formerly, Orion Securities Inc.) from 1985 to 2015 and former CEO of Hive Blockchain Technologies Ltd. He was a director of Sandspring Resources Ltd. (now GLD-X Mining), a director of Lithium X Energy Corp. prior to its sale, and Fiore Exploration Ltd., and BQ

Sponsorship of a Qualifying Transaction of a capital pool company is required by the TSXV unless exempt therefrom in accordance with the TSXV’s policies or a waiver is obtained. In the absence

Neither the TSXV nor its Regulation Services Provider (as that term is defined in policies of the TSXV) accepts responsibility for the adequacy or accuracy of this release.